skip to main | skip to sidebar

What Do You Do In Your Spare Time?

People often ask me what I do in my spare time. Well, lately it's been involving EVERYTHING related to food. Typically it's recipe development stuff. It's usually always cooking food because I SUCK at baking.
Well, guess what folks?!?!
I baked a batch of red velvet cupcakes with homemade cream cheese frosting. I made a phone call or two and two of my friends showed up with doggie bag in tow.
They nodded and gave their approval - so this one is a keeper.
But, that's so fat of me. I sit and home and think of recipes. Isn't that just the fattest thing ever? Really - I could use my time on earth more wisely - but here I am thinking of recipes. Hilarious!
So, what do you do in your spare time?
Enjoy the pics and the recipe will be coming sooner or later!
-DTW 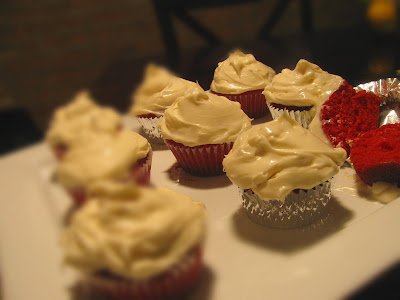 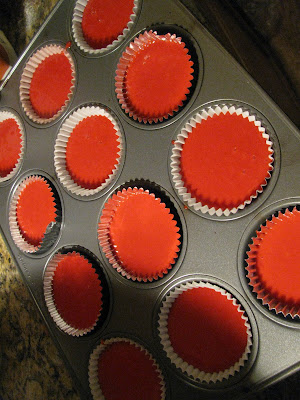 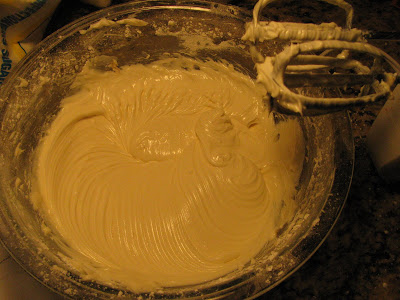 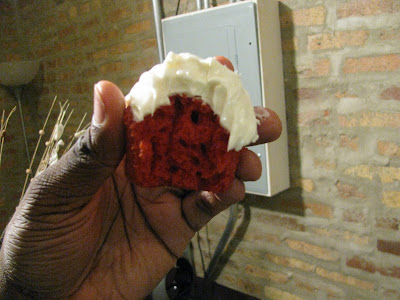 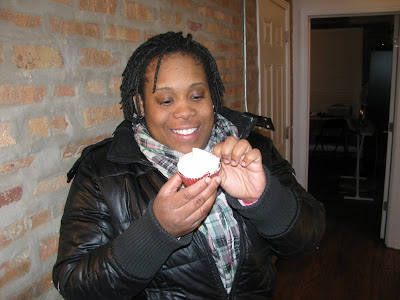 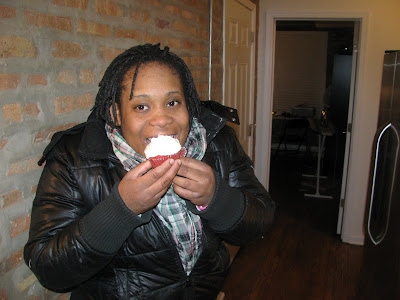 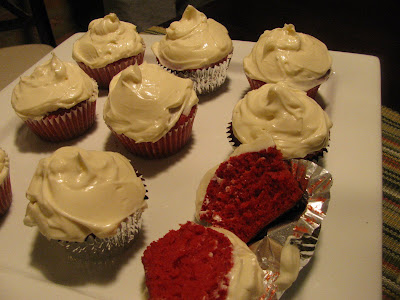 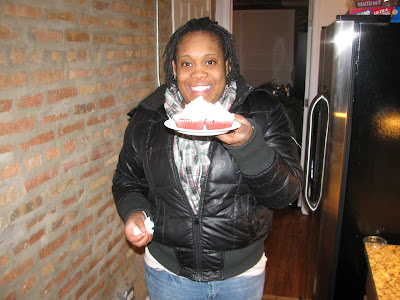 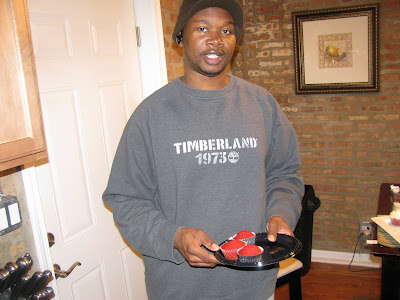 I should NOT have come over here lol. What kind of camera do you use?

those cupcakes look really yummy.....can't wait for the recipe.

What pretty cupcakes! They look really light and fluffy. Yummy!

i think about food... lol. these looks like they want to jump into my tummy :)

In my spare time I sit around thinking about moving to Chicago so I can have your leftovers!

My mom says this to me all the time "that's so fat of you!" Hahaha in my spare time I think about food, seriously. I don't think up recipes but I do search for them constantly!

I guess you don't suck at baking! Congrats on the cupcakes. They look fabulous!

Um. Actually. We recipe search and develop as well. But that's not really during free time. That's during the time we SHOULD be doing things like work...

Other than that, we counteract the fatty tenancies with some low impact physical activity like cooking.

So pretty and colourful! Your friends must have been thrilled.

My time spare is spent here DAMN IT!!!! lol I could really go for some of those cupcakes.

God I may risk my life for a taste of those beautiful cupcakes.

Yes there are some things worth dying for...LOL!

Those look great! My daughter often whips up at holidays these same type of cupcakes and they are so good, even though i'm not a sweet freak, i do enjoy a good treat. What do i do in my spare time...well Blog of course!

Those came out great. Next time you try them put some buttermilk in with the cream cheese frosting. I'm telling you it rocks.
I spend way too much of my spare time in food bloggerland this winter--it's too darn cold out!

I am SO jealous of your friends right now. In my spare time I look at food blogs like yours and drool over pics of food. Yep, very fat of me as well. =(

I still have never tasted red velvet cake - I really should work on that!

Your frosting looks crazy good. Get me spoon and I'd eat the whole bowl.

I watch sports and I write in my spare time, although if I had cupcakes like those at my disposal, I'd add that to my list as well

Those cupcakes look amazing! I never make cupcakes any more, since the kids are grown & gone. However, I might just have to try them out. You know. So I can recommend them.

Great job on the cupcakes! They look super delicious!! I love the bright red color!

Red velvet cupcakes are just the perfect treat. Very impressive for someone who "sucks" at baking. Looks good to me!

You have too much energy. In my spare time, I just veg out in front of the tv! :)

I do bake all of the time and these look wonderful. Red Velvet is the BEST!!

I love baking in my spare time too :-) I LOVE RED VELVET TREATS!!

You cracked me up with your "that's so fat of me" comment in the post. I think about, talk about, prepare and eat food in my free time too! About once a week I tell my husband it's amazing that I don't weight 500 pounts, because I sure talk like I should :) I'm the type of person who's planning the next meal while eating the current one!

Cupcakes look good. get ready for everyone to ask for some.. lol

Cooking and baking is only part of my life, although the one my family probably enjoys the most :)

I actually have to make some red velvet cupcakes this weekend so if you could get that recipe posted by Sunday morning that would be great.

In my spare time I blog and think of food. In fact, I do both in my not so spare time.

Looks soo good!!! I would love one of those cupcakes right NOW!!!

Darius--I had a friend decide to leave science in favor of becoming a pastry chef. Your question constantly haunted her, yet in the end it came down to the reality that she found joy in cooking. And the reality is, when you consider how many memories are linked up with food and friends, that you inevitably are bringing joy to others! Huzzah!

I've never had a red velvet cake! But I would love a bowl of the frosting and a spoon. Or maybe if I dipped slices of banana in it I could call it healthy?

These cupcakes look appetizing! I think your friends are lucky to have a friend that can cook amazingly!

Spare time?? LOL, you are a funny guy!

Hello !.
might , perhaps very interested to know how one can collect a huge starting capital .
There is no initial capital needed You may start to receive yields with as small sum of money as 20-100 dollars.

AimTrust is what you haven`t ever dreamt of such a chance to become rich
The company represents an offshore structure with advanced asset management technologies in production and delivery of pipes for oil and gas.

Its head office is in Panama with structures around the world.
Do you want to become a happy investor?
That`s your chance That`s what you wish in the long run!

I`m happy and lucky, I began to get real money with the help of this company,
and I invite you to do the same. It`s all about how to select a proper partner utilizes your money in a right way - that`s the AimTrust!.
I earn US$2,000 per day, and my first investment was 500 dollars only!
It`s easy to get involved , just click this link http://wyzatemi.1accesshost.com/cacado.html
and go! Let`s take this option together to become rich

Hi!
You may probably be very interested to know how one can manage to receive high yields on investments.
There is no initial capital needed.
You may begin to get income with a money that usually goes
on daily food, that's 20-100 dollars.
I have been participating in one company's work for several years,
and I'll be glad to share my secrets at my blog.

Please visit my pages and send me private message to get the info.

Darius T. Williams
Chicago, Illinois, United States
one person. many facets. i cook. i blog. i bake. i create. i develop. i employ. i encourage. i thirst. i hunger. i feed. i quench. i speak. i listen. i engage. i deploy. i call. i answer. i depend. i provide. i lean. i support. and at the end of the day, i seek to do it all being worth at least $1M.

What's It All About?

It's simple - this is a blog about simple, everyday dining and cooking from the young African-American urban experience.

Life is full of surprises, meals don't have to be. Everything I cook will be simple, healthy, fresh, and most of all - it will taste phenomenal. Get ready for sights, recipes, comments, and photos that will make you the absolute best at EVERYDAY COOKING!